Plant Party is OUT! 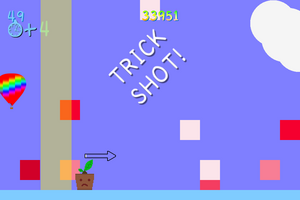 The game originated from a one hour game jam that I participated in on December 28th, 2018.  The theme was "Can't Stop".  Here's what the original looked like:

I was having a lot of fun with this little mechanic.  I felt that I had a golden nugget, at least enough to polish it and put a fancier version out.  So I spent maybe 4 hours a week right up until last week, working on the game.  I learned quite a bit from the experience of making this game:

I could spend the next year polishing the game by adding better, more animated art, different game modes, an online leaderboard, and many other features that certainly would have made the game better.  I made the decision not to do those things because I knew that I wanted to continue work on my other projects, and I have made a promise to myself to not work on any long-term projects.

I am interested in quantity over quality, at this point in my life.

That said, there are some things I may add to Plant Party in the near future:

In the meantime, I'll be working on my other super secret project.

Push a potted plant around.